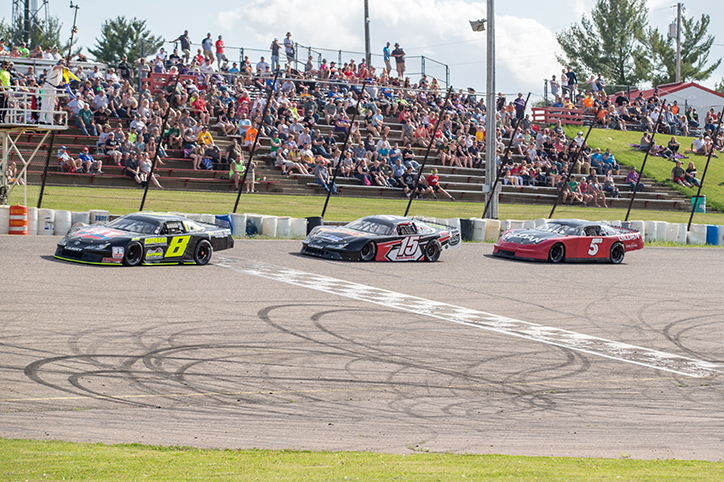 PLOVER, Wis. — No one was running faster times with 25 laps to go than Gabe Sommers at Golden Sands Speedway’s Dick Trickle 99 memorial race on Monday.

Sommers closed a sizable gap between him and race leader No. 8 Chad Butz and began making inside runs to grab the lead on Memorial Day.

The lead never quite materialized, however, as Sommers grabbed a close second-place finish. 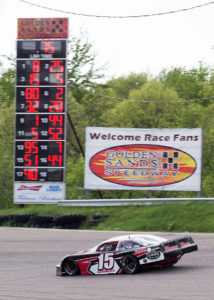 With 24 laps to go the No. 1 car of Abe Bires spun, bringing out the caution flag.

Drivers had the inside-outside option on the pending restart. Sommers sat second place and had to choose between outside on the front row, or giving up second place to John Beale and the No. 5 car, which had been tailing him for roughly 70 laps.

Sommers opted for the outside, hoping to fly by Butz, who had been slowing after leading almost the entire race.

He did pass Butz after a few laps, but it was Beale who won the restart, getting by both frontrunners and grabbing a lead he wouldn’t relinquish.

During Sommers’ brief battle with Butz, Beale managed to gain a six- to seven-car length advantage for the final laps.

Sommers managed to whittle the lead down to a car length, but didn’t have enough laps left in the race to take a shot at the lead.

“If we were able to get single file a little quicker, I might have been able to catch up or a late race caution would have really helped there at the end,” Sommers said.

Gabe Sommers and the GSR team made a steady climb to the top of the field at Golden Sands Speedway on a day that only would have gone better if it finished holding a first-place trophy in victory lane.

“We struggled a little bit off the trailer,” Sommers said. “We dialed it in and got it better and better every practice and we were running pretty good in the race.

“Just not enough, just really close. Maybe would have did something different than that last restart. We have to move on to the next one.”

The crew unloaded the car Monday morning to find its setup extremely tight for the warm track conditions, but when it came time to qualify, Sommers and crew chief Chris Wimmer had found something they could work with.

“We wanted to go racing the last two months and didn’t have a chance,” Wimmer said. “To finally go out and run good is definitely rewarding and a good start to the season.”

Sommers ran a 12.109-second lap for the third-fastest time. He started the Trickle 99 sixth in a field of 17 cars and quickly surged to the front of the pack.

An early incident threatened to push Sommers into the front stretch fence, but a good call from GSR spotter Max Sommers and quick reaction by Gabe helped avoid a close call.

“I told him to stay in it,” Max Sommers said. “If you let off, obviously the guys coming up behind you are gonna run into you. It paid off. He got in the sand a little bit, but overall not much damage.”

Gabe said he felt like he was driving at Daytona Beach. You'll see why 🤣

GSR thanks all its great sponsors for sticking with us into the new season.

Gabe and the No. 15 return to the track at State Park Speedway on Thursday, May 28.