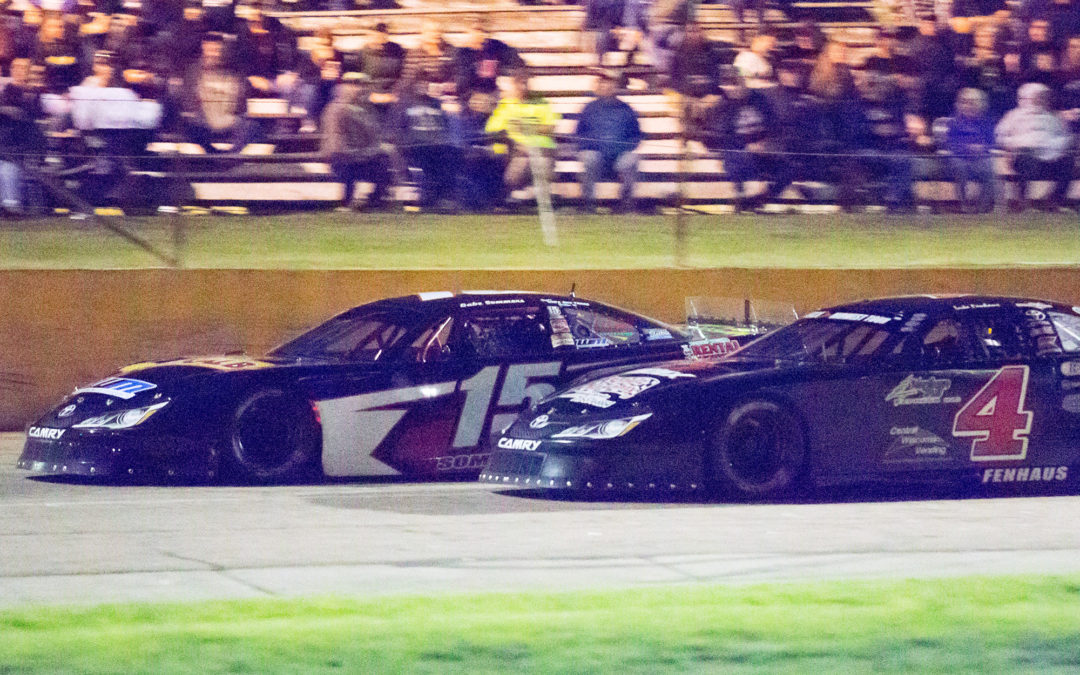 WAUSAU, Wis. — A win is just around the corner, Gabe Sommers said after earning a second-place finish for the second time this week.

Sommers clawed to the front of the pack at State Park Speedway on Thursday, falling just short of a victory-lane visit just three nights after opening the season runner-up at Golden Sands Speedway on Memorial Day.

“Just a typical short track night,” Sommers said. “The car wasn’t handling the best in the beginning. We had a late-race caution and got to second. Just had to drive the wheels off it. We really couldn’t get the setup perfect. We had to get around some guys at the end. Just short track racing.”

Slow traffic pushed Sommers from sixth to ninth over the first three laps, leaving a hill to climb. Sommers jumped to fifth by Lap 20, but made his most crucial push from fifth to second over the final 10 laps of the 60-lap feature.

“Started kind of deep and fell back,” Sommers said. “We couldn’t wait there at all. We tried to get as many spots as we could while times were still good and beat the guys that were burning their stuff up.”

GSR crew chief Chris Wimmer couldn’t make sense of the struggles with the race setup, but commended Sommers for the way he drove.

“It was an exciting race,” Wimmer said. “We were struggling all day today, and I don’t know why. We couldn’t find anything, couldn’t hit on anything. Gabe wasn’t happy with the car, so he did a really good job finishing second.

“He changed his driving style and adapted — drive a little bit different than he normally wants to drive. He had to do the best with what he had. He did an awesome job tonight.”

Sommers battles to the front

Moving up the field included extended battles with the likes of the No. 4, Luke Fenhaus, and the No. 22, MG Gajewski.

The battle with Fenhaus dragged on lap after lap as each attempt Sommers made to get by him ended with a bumper straight in front of him. Sommers worked inside Fenhaus multiple times, clearing the No. 4 rear left quarter panel. The two made minor contact several times.

The fight ended when Fenhaus’ right front tire went down with eight laps to go, bringing out the caution flag as he brushed the wall in turn four.

Sommers grabbed second place on the restart behind eventual winner Justin Mondiek. The No. 15 DeKalb Toyota gave Mondiek one good push over the final several laps but couldn’t find a way around. Mondiek led the race’s final 15 laps.

“It didn’t really handle any better. I just had to drive it harder and harder,” Sommers said. “There really wasn’t much there. You’ll have that some days the car will be really good and tonight it really wasn’t.”

Slinger next on the schedule

GSR heads to Slinger Speedway on Sunday for the team’s third race in seven days. Sommers has not raced at Slinger since running the Midwest Truck Series.

“Gabe is going to need some laps there,” Wimmer said. “Slinger drives different than anywhere in the country, but hopefully he’ll pick it up really quick. The main goal is to go there and learn to get ready for nationals.”