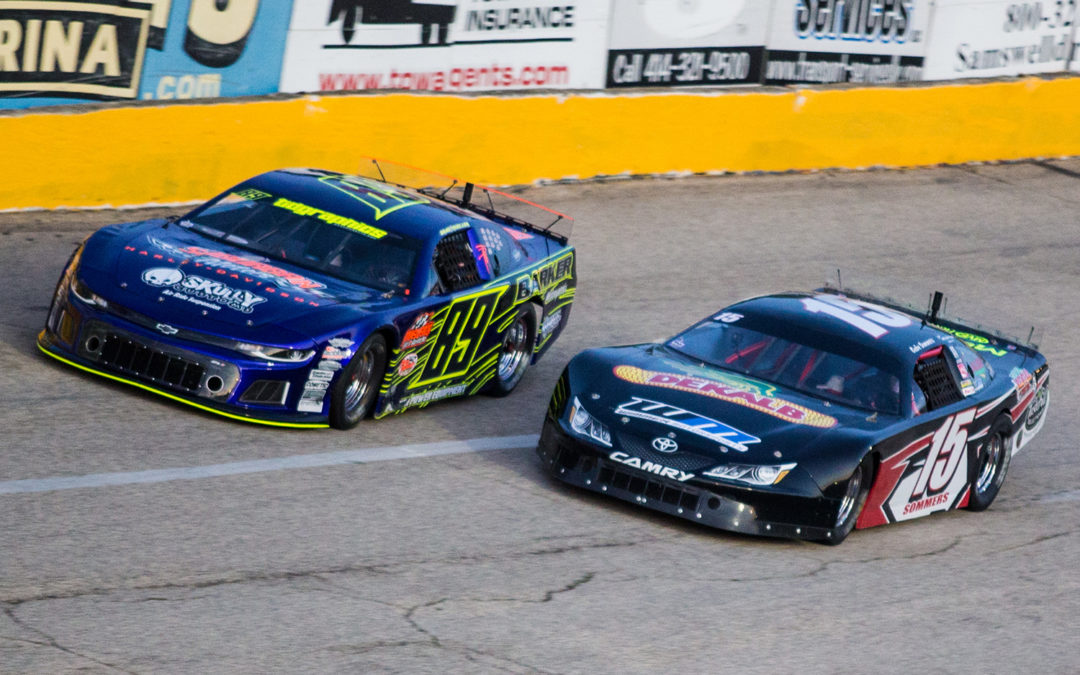 SLINGER, Wis. — A bittersweet run was still a big confidence boost to Gabe Sommers Racing and its hopes to compete at Slinger Nationals on July 7.

Gabe Sommers finished 10th at Slinger Super Speedway’s WABAM 75 on Sunday night after climbing to fifth place with 12 laps to go behind the wheel of the quickest car on the track.

Sommers and the No. 15 looked positioned for a finish near the top of the field when the No. 72 of Mike Held slid up the track in turn one and pushed Sommers into the wall. Sommers finished the race despite minor damage, but he lost too much valuable ground with too few laps remaining on the world’s fastest quarter mile.

“I knew we had a really good car,” Sommers said. “We were gaining a lot of spots. My spotter said we were really good on the lap times and running really consistent. The car kept on getting better and we just worked our way up through the field.”

Sommers recalled being on the outside door of Held’s car when the 72 started to cut off real estate. Sommers found himself quickly pinned to the wall and then took a small shot from behind by a trailing car before he managed to escape further trouble.

“I think (Held) was having some radio communication issues with the spotter and put us into the wall, entry to turn one and I think it knocked the toe out pretty bad,” spotter Max Sommers said. “We just happened to get freight-trained back to 10th, and by that time it was too late to make up the ground.”

No. 15 turned fastest laps on the track

Sommers’ 10th-place finish was still two spots better than his first attempt running Slinger on May 31 for the Alan Kulwicki Memorial. He feels much more confident with the track as next month’s Slinger Nationals approach.

“We were able to make some good adjustments with the help of crew chief Chris Wimmer and Wimmer Motorsports,” Sommers said. “We found some stuff that helped with the long run, and biggest thing that I learned today was how to pass cars here. It’s really tough to get around them and keep the momentum going.”

Sommers, Wimmer and the rest of the team were unsure about the car’s potential early in the day Sunday.

“There was a problem with the car that we chased all day and found at the last-minute scuff session,” Wimmer said. “We kind of threw the whole day away, but we got it going good in the race.

“Gabe did an awesome job but didn’t have the finish he deserved. “

Sommers posted an 11.450-second time on his third lap to secure a 12th-place starting spot after starting 15th two weeks ago. He admitted to a small slip-up on his fourth and final qualifying lap, but still easily climbed the field.

“I kind of screwed up in qualifying and got a little loose. I think we would have had a top-five car,” Sommers said. “There was definitely more in the car and in the long run the car was really good. Hopefully we’ll be able to find a little bit more when we come back.”