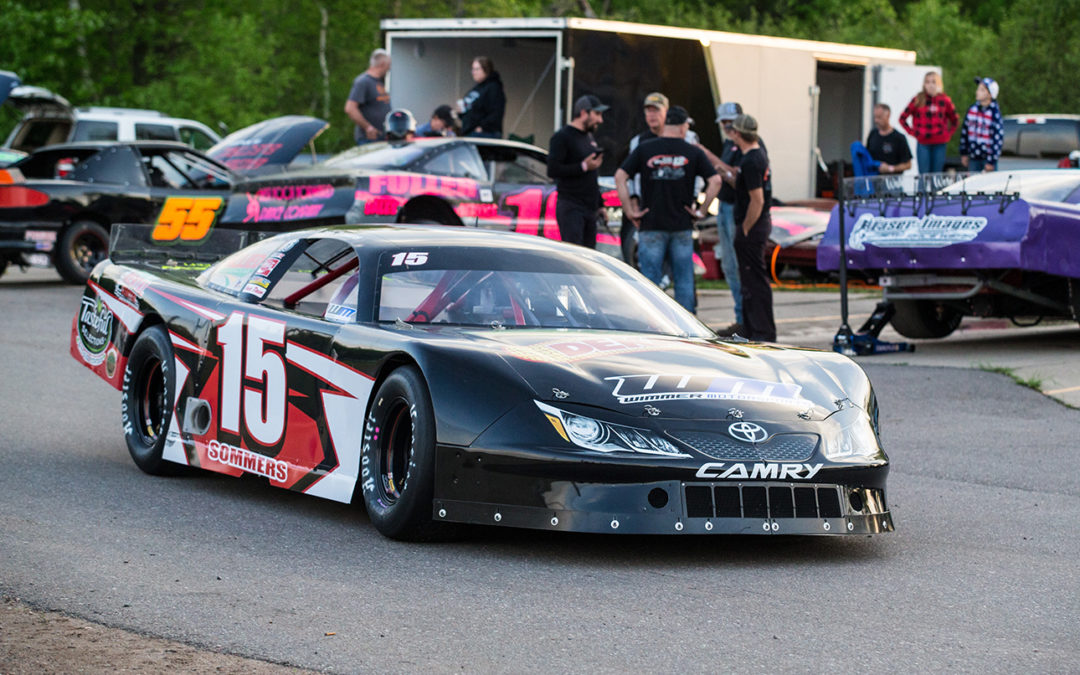 Teams, points series and venues have been left scratching their heads thanks to early-season obstacles caused by the COVID-19 pandemic, often times deciding which races will or won’t run or where drivers and teams will or won’t travel at the last possible moment.

Each team will certainly come up with its own strategy to navigate the murky waters. GSR has focused its attention to preparing for Slinger Nationals on July 7.

“That’s a race that we’ve had in our crosshairs for the last couple of years,” GSR team manager Dan Sommers said. “And we’re focused to do everything that we can to prepare for it, and we’re gonna give it a shot.”

Sommers and the No. 15 hit the famed quarter-mile oval for the first time in a super late model May 31 for the Alan Kulwicki Memorial event. He returns to Slinger for GSR’s next race on Sunday, June 14 for the WABAM 75.

Sommers finished 12th in his first attempt to crack the ultra fast course. Gabe’s only previous experience at Slinger came running trucks in 2017.

“It’s a lot different than any other track,” Gabe Sommers said. “You guide it in to the corner super hard and get on the gas as soon as you’re done lifting the throttle. The racing is super fast. You get through one corner and you’re already to the next.

“It just feels like you’re on a train track and hooked to it going wide open.”

The Kulwicki race became exactly what GSR was hoping for — a baseline race to begin building a competitive car suited to Gabe’s style and liking.

Qualifying 15th left some adjustments to make, and by race’s end Gabe was making up time and running some of the quickest laps on the track.

“At the end of the race, the car was super consistent,” Gabe said. “Seat time there is really big and getting to know the track. It’s really tough coming there the first time and just going out racing right away.”

Dan and Gabe believe the team is much better positioned to compete when GSR unloads at Slinger on Sunday.

“I think that when we left last time, a lot of those boxes were checked off and I think Gabe is very comfortable with the racetrack,” Dan said. “But we need to put a better car underneath Gabe, and we’re working at it.”

GSR may decide to run a third time at Slinger — before Nationals — depending on the outcome.

“Hopefully when we leave there on the 14th of June, it’s better than the first time,” Dan Sommers said. “And if it warrants for us to go back a third time. then we will. At that point, if we haven’t hit on something, the pressure will mount as far as what the outcome will be at Nationals for us.”

Slinger Nationals is no easy race to enter, even with a dialed in race car. Only 12 drivers qualify on times, the rest must earn entry by racing.

Very few outsiders make the race on time, an accomplishment often dominated by local drivers. GSR crew chief Chris Wimmer went to Nationals four times before he even qualified for the big race.

Dan Sommers called it the hardest race to make in the state of Wisconsin.

Gabe Sommers Racings wishes to thank Wimmer Motorsports, Fury Chassis, DeKalb, Kwik Trip, Tasteful Selections and all its sponsors for helping the team get off to a strong start to the season — which includes a pair of second-place finishes at Golden Sands and State Park Speedway.