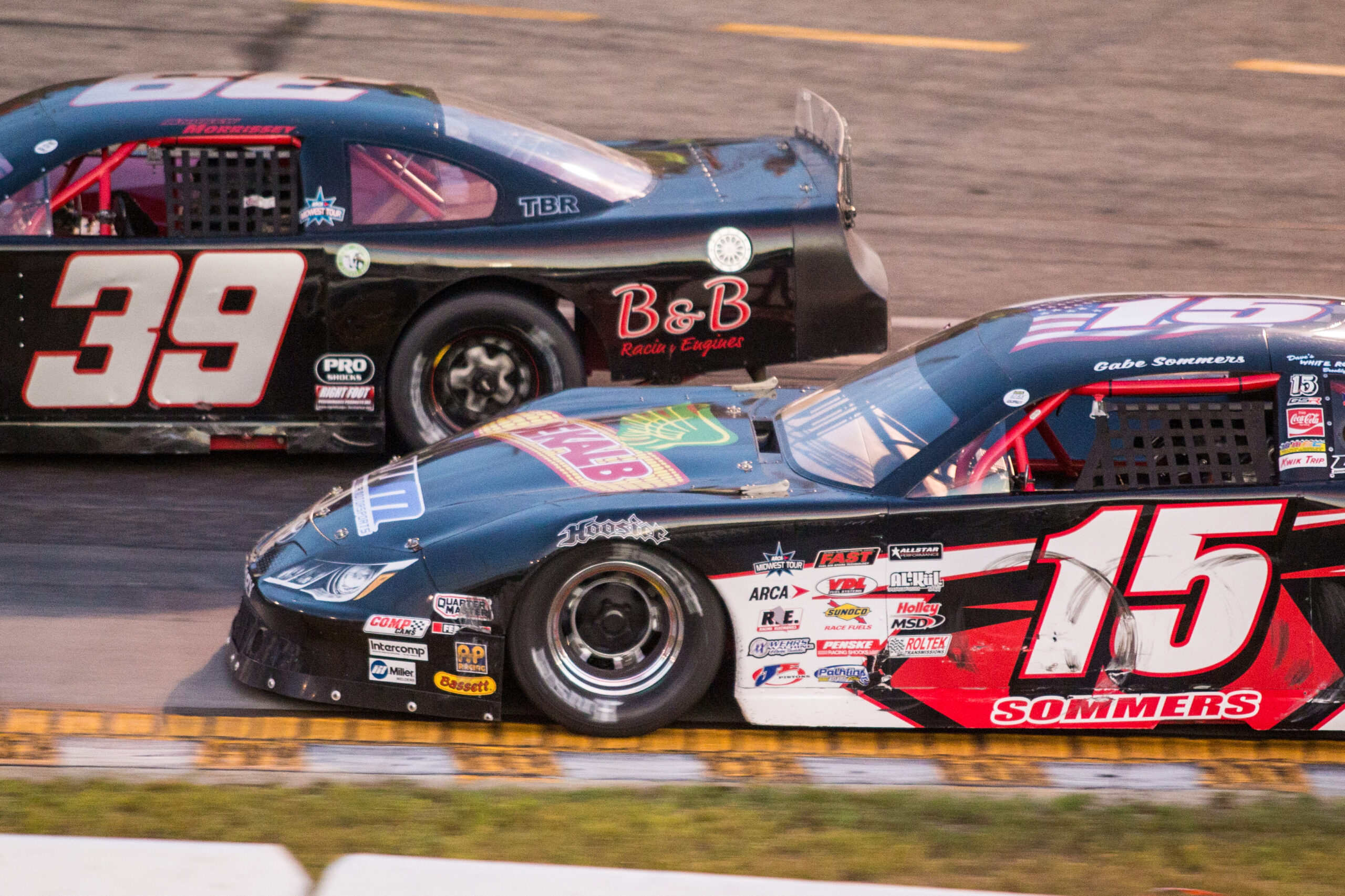 Sommers had a front-row shot on final restart

WISCONSIN DELLS, Wis. — Gabe Sommers vied for a win at Dells Raceway Park Saturday night, piloting a rocket ship to a third-place finish at the Alive for 5 Capital 100.

Sommers and the DeKalb No. 15 routinely posted some of the fastest lap times on the track, coursing through the field from 14th place early to as high as second and a battle for the lead with two laps to go.

Race winner Dalton Zehr (No. 119) lined up inside front row on the race’s final restart with two laps to go — Sommers on his outside.

The outside line wasn’t where Sommers made his fastest laps of the night, unfortunately. Zehr took the advantage on the restart while Casey Johnson (No. 5) — who Sommers ran down and passed during the final 10 laps — sneaked inside to take the runner-up spot.

“I couldn’t give the outside up and let Casey have a shot at the win, so I had to try it,” Sommers said. “I did some adjustments inside the car, but I just didn’t have enough to get around them on the outside.

“We struggled with the outside a little bit, and we were better on the bottom and just had to run that line pretty much the whole race.”

Sommers preferred the outside line the last time GSR took on Dells Raceway in another third-place finish on the Fourth of July.

Sommers and crew expected much of the same, but it turned out the car was tight on the outside and they had to adjust.

No. 15 was gaining a full car length or better every lap

It did take some time for Sommers to discover just what he had on the bottom of the race track. He started on the outside of the sixth row, and it took nearly 30 laps before Sommers even had the opportunity to drop the No. 15 to the bottom of the track.

Sommers fell to 14th place during that time and sat well behind the leaders after 27 laps.

The night’s first caution — caused when Mike Lichtfeld (No. 44) and Jordan DeVoy (No. 38) tangled and ended up in the wall between turns one and two — brought the field back together and gave Sommers the reset he needed.

Sommers climbed eight positions over a 16-lap stretch from 14th to sixth. Then he set his sights on the field’s top contenders. He chased down Skylar Holzhausen (No. 78), Ryan Farrell (No. 80), Andrew Morrissey (No. 39) and Casey Johnson (No. 5).

“I knew the car was really good when I started running the bottom and picking guys off,” Sommers said. “I knew right away.

“It feels good to be able to watch the gap close up in front of you when you’re racing. On those long green-flag runs, we were picking them off. This field just got really spread out and we were able to gain a lot of spots back, so it showed how quick we were.”

The race’s second caution flag didn’t fly until four laps remained in the race. The yellow put Sommers right behind Zehr and leader Ty Majeski (No. 91).

Zehr passed Majeski, who led 95 laps, on the restart, but Majeski spun Zehr two laps later, trying to retake the lead. Sommers passed the pair and led at the stripe, but Majeski admitted fault to causing the wreck, so Zehr was able to maintain his top spot for the final restart of the night.

250-lap event coming up in Kaukauna

Sommers and the GSR team has a quick turnaround with its next race on Tuesday at Wisconsin International Raceway in Kaukauna for the Gandrud Auto Group 250.

“I really like that track, so hopefully we can put a good package together and be able to run with those guys,” Sommers said. “There’s a lot of big names, and hopefully we can get a top three out of that race.”

“Just going in the gate and see that guys that are racing with you gets Gabe pumped up about it. It gives an extra inch to compete harder.”