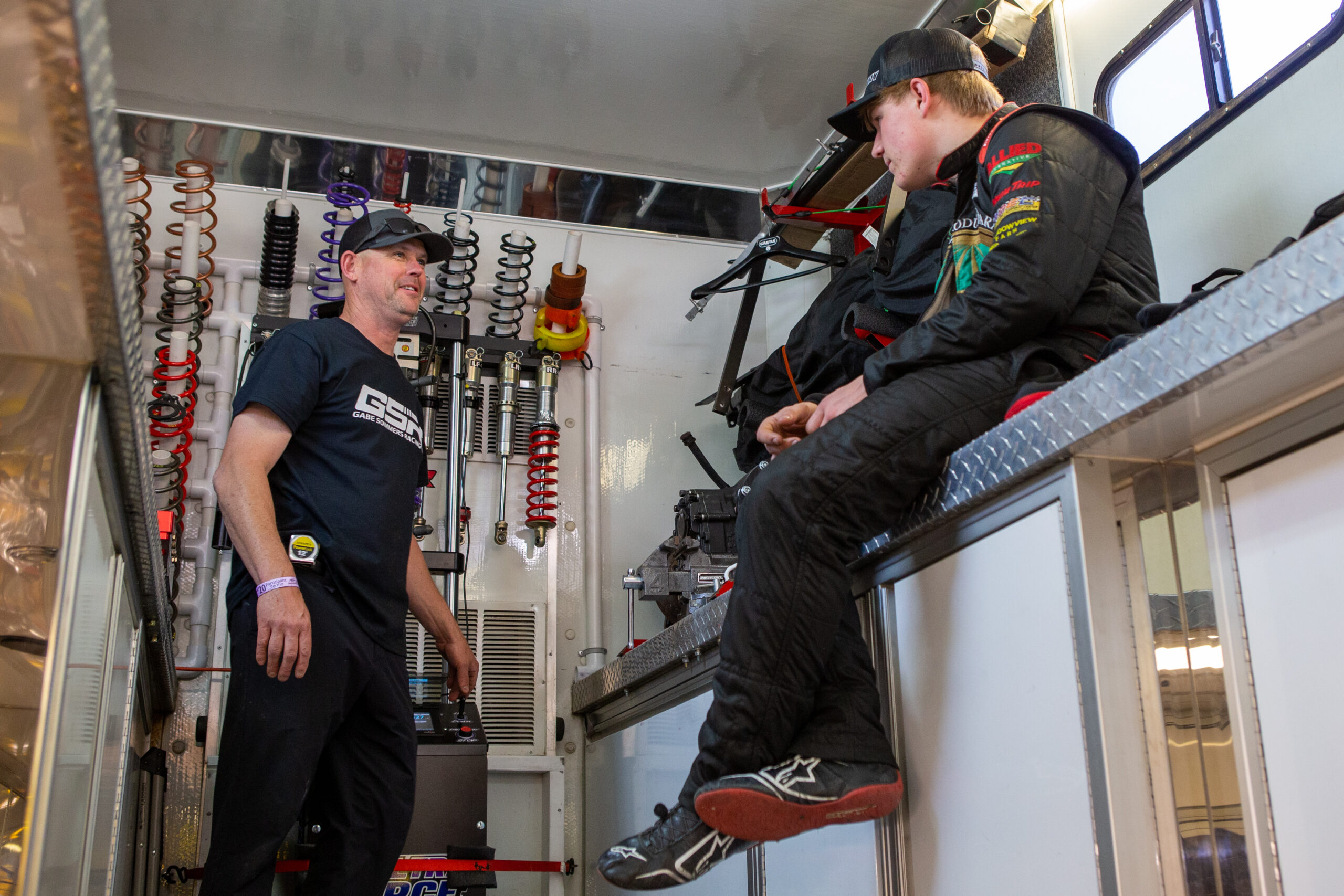 GSR looks for Dells success to be season’s turning point

The hauler routinely found its stall at Raceway Park in the Wisconsin Dells. The car’s black finish gleamed beneath the sun. Every sponsor sticker adhered exactly where it was meant to be placed.

But something needed to be different.

Even if the weekly aesthetics had been immaculate, the results over the first two months of the 2021 racing season were far from stellar, and certainly sub-par compared to the Gabe Sommers Racing team’s expectations.

“We really haven’t been able to focus on the car a whole lot,” Sommers said.

Lack of continuity has been a particular concern. It began on opening weekend at the IceBreaker 100 — the very same track that witnessed Sommers’ best run of the season in Saturday’s Dairyland 100.

The engine went that weekend, failing as Sommers made his way through turns three and four. The opening weekend was lost, and pulling the motor cost precious time for changes and essentially meant beginning the season anew.

“We haven’t been able to dial in on what we’re running,” Sommers said “When you keep changing stuff, you can’t get a good baseline setup for the tracks.”

The rebuilt engine from the IceBreaker rumbled around the third-mile oval, leading for 24 laps. Sommers faded just outside the top five by Lap 75. The motor blew again on Lap 76, handing Sommers and GSR their second DNF of the season.

Sommers’ frustration grew. The car needed to be ready to return to the Dells in just four days. He was pulling a motor again and starting from scratch, instead of fine-tuning a fast-flying car, .

The difference this time around was Sommers was the only member of the team with the time to work in the shop.

Gabe needed to be in the difference in the team’s fortunes.

GSR team owner and Gabe’s father, Scott Sommers, watched Gabe run back and forth between the shop and home all week. As soon as Gabe’s dinner plate was clean, he went back to work.

“Setting up a race car is tedious work,” Scott said. “Gabe was constantly crossing T’s and dotting I’s. People who are normally in place to lend a hand and help out just weren’t available. Gabe just decided, ‘I’ve got to do it myself.’”

Gabe occasionally leaned on Jeff Fultz or Chris Wimmer — both of whom are serving as GSR crew chiefs at various events this season — with a text message or phone call if he had a question.

But from motor swap to oil lines and shocks to scales, Gabe prepared the race car from the ground up.

“Working with these guys (Chris Wimmer, Jeff Fultz, Travis Sauter) over the years has created an opportunity for Gabe to learn so much,” Scott said. “He carries so much knowledge, and it allowed him under these circumstances to show how much he has really learned.

“If he didn’t know, we would never have gotten it done. He had to put his big boy pants on. He had to do the whole thing from start to finish.”

Everything came together relatively quickly, given how much work there was to do, according to Gabe. Scott estimated Gabe’s shop time at 50 hours or more from Tuesday to Friday.

“I knew it was a good opportunity to show I could do it myself,” Gabe said.

The shop was still pretty quiet Saturday morning, hours before the race. One more task remained before the rest of the GSR team convened at the track — Gabe and his mother, Sheri, hauled the car to the Dells on their own.

Everything came together at the track. Gabe ran the fastest lap in the final super late practice. He had a strong qualifying run and wound up starting on the pole for the feature after winning his qualifying race, advancing from fourth to first over eight laps. Even an emergency power steering pump change while the supers made their warm-up laps couldn’t slow the momentum.

Gabe earned a podium finish behind Ty Majeski and he feels like GSR is in a good place to capitalize on the midseason stretch of the schedule, including a big ARCA Midwest Tour event at the Milwaukee Mile on Father’s Day.

“It might have been torture at times and put Gabe in a few situations he felt uptight or less than 100 percent confident, but this performance only builds confidence,” Scott said.